Tourists come to Ipoh, if they do at all, for the food for which the town has a (rather inflated) reputation.  That does not mean there are not other things to do and see in town if you know where to look.  Ipoh is a predominantly Chinese town and as such we have a lot of temples.  Some of them are quite modest, a small building near the main road but some are built into the cliffs in the limestone hills that proliferate in this region and they are truly spectacular.  A few weeks ago, during my father’s visit, we drove down to the temples behind the Pomelo Stall on the Gopeng road.

We had seen these temples from the car during our house hunting expedition back in March and had been meaning to go and explore them for some time.  The street behind the stall boasts three popular temples.  We visited two, the Ling Sen Tong temple and the Sam Poh Tong temple.

Ling Sen Tong is a Buddhist temple whose name, I am told means something along the lines of Heavenly Spirit Rock and it is a riot of colour  Walking up to the entrance you are greeted by a pair of rainbow hued dragons, and then, once through the gates, to a courtyard packed full of mythical creatures such as the Monkey King and, behind grilles, the animals of the zodiac.  The temple inside the cave is well used and the temple appears to attract the devout every bit as much as the tourists.


Walking along the road we passed Nam Then Tong, a taoist temple which is, apparently, one of the oldest in the city.  We did not go in, however, as although I am sure it was open it did not look too busy and we did not want to disturb the caretaker.

The final temple we came to was the Sam Poh Tong temple which, other than the Perak Cave Temple further to the north of the city, is probably the best known of all Ipoh’s temples.  It was built just over 100 years ago and, like Ling Sen Tong is a Buddhist temple.  We were told that the name meant cave of the three gems.

At the entrance to the temple you are greeted by a lady selling kangkong vegetables for the resident tortoises.  A big bunch sells for RM2.  You can buy a bunch of the same size for half the price in the main temple but the lady is pleasant and knowledgeable about the temple and its attractions and worth taking the time to talk to.  We took some time to walk around the gardens which are very much worth a look (they won the Malaysian Garden of the Year 1993 Award!).  It does appear to be stuck in time, wondering through and watching the fish swim in the ponds we could have been in just about any time, 2015, 1993 or many, many years before.  The gardens were tranquil and a haven from the hustle and bustle of the city centre.

The cave itself is quite small, high but narrow in most places but it does appear to attract worshippers on a regular basis as the walls are black with soot.


We walked through the cave to a garden beyond which is completely surrounded by the hills such that the only entrance is through the temple itself.  The garden had the potential to be a bit of a hidden Eden (or whatever the Buddhist equivalent is) but it was, sadly, full of mosquitoes which goes some way to explain why the temple sells mosquito repellent along with votive offerings and kangkong for the tortoises.  There were places to sit and admire the large pagoda built against the stunning backdrop of the hills but it was not possible to go in and look around.  I am not sure whether this building is actually used any more.

The main attraction for the children was the tortoise pond.  Armed with their vegetables they leaned over and tried to attract some of the animals towards them.  The tortoises seemed quite keen on the food and the ones nearest us crawled over.  The animals are truly engaging but I must admit that I felt rather sorry for them as the pond is packed and they could do with some cleaner water.

The visit was a complete spur of the moment trip but I am very glad we went despite the haze, which has blighted the last month or so and I am looking forward to exploring some of the other temples hidden around Ipoh.
Added to the Expat Family Link Up run by Seychelles Mama - click for more interesting Expat Insights! 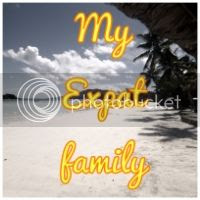 Click the picture below for more posts on life in Ipoh.