During our trip to Riyadh earlier this year Mr EE and I followed the advice of friends and, after our visit to Masmak fort, took a car out to Burjairi, the gateway to Diriyah.  A short drive from the centre of Riyadh, Diriyah was the initial home of the Al Saud family and the capital of the First Saudi State (1744).  The town is in the process of being redeveloped with the aim of turning the old capital into an open air museum.  It is not yet open to the public (we had heard that it is possible to book private tours we had not got round to arranging something) but it is possible to view the walls from the Burjairi quarter.  Designed to manage visitors when Diriyah is open it is a pedestrianised area with gardens and a lot of picnic spaces it is the perfect place to while away a few hours walking and enjoying the open spaces of an evening before choosing a restaurant for supper.  In truth, until the museum opens there is not really much else to do.   We eschewed the highly rated Najd House restaurant with its beautiful décor and private dining areas, mostly because although it receives rave reviews neither of us really enjoy the traditional foods it offers.  For those who do, however, it would make the perfect place to spend an evening.  We will certainly be back, probably with the children, once the museum is fully open.

The following day we decided to visit the National Museum. The museum site is huge and sprawling, it took us half an hour to find the entrance. This highly rated museum was, sadly, almost empty and other than a VIP guest being guided through by minders and security, we had the place to ourselves.  Entry costs are low, SAR10 per person and allows access to all eight exhibition halls.  These encompass: Man and the Universe, Early Arabian Kingdoms, The Pre-Islamic Era, The Prophet’s Mission, Islam and the Peninsula, The First and Second Saudi States, The Unification and the Hajj and the Two Holy Mosques.  Again this will be a place we return to, not least because Master EE is studying neolithic life in Saudi Arabia as one of his school topics this year. 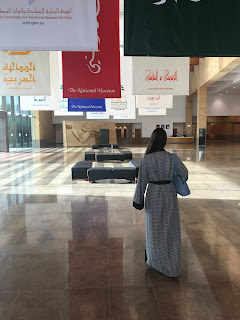 Al the sections were interesting but the stand outs for me were the displays about the Early Arabian Kingdoms and the Pre-Islamic era.  They were well designed and informative.  The section on the First and Second Saudi states and the Unification were also very interesting, like the Masmak Fort the day before it told us a lot about a period of history we knew little about.  They were not quite as well presented or as rich in detail as the displays at Masmak, however, which was a shame.  The museum’s final hall is dedicated to the Hajj and the two Holy Mosques and includes two huge replicas of the Mosques.  As non muslims we are not permitted to visit Makkah or Medina so these replicas are the closest we will get to seeing these beautiful and historic buildings.

We spent a little bit of time exploring the grounds (and sneaking a peek at the car collection of King Abdul Aziz which is housed in a different building) before going back to the hotel to get ready for the evening, the event which had necessitated the trip in the first place.  We had hoped to have the time to see the view of Riyadh from the Sky Bridge in the Kingdom Tower but by the time we got there it had closed.

We enjoyed our time in Riyadh and we will certainly return  as there is lots to see and do there.  Mr EE was back there a few weeks later, however, and said that it really was not as much fun on his own, feeling rather bleak and unfriendly.  Like most places I think, it is the people you see it with that make it. 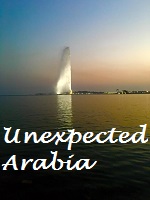